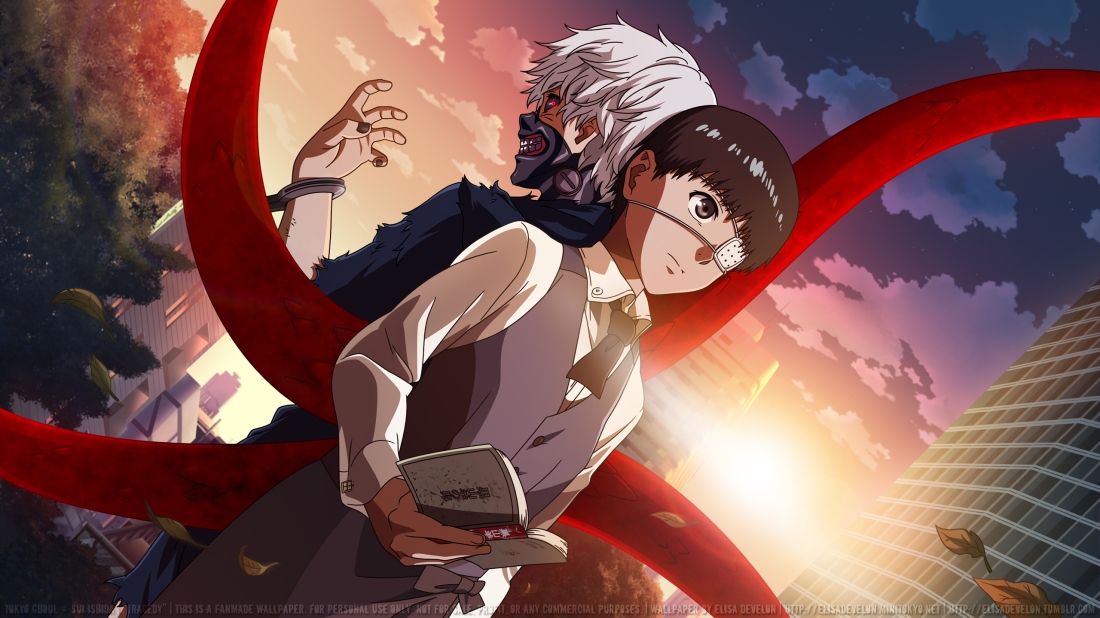 The Tragedy of Ken Kaneki

The Tokyo Ghoul manga started serialization on September 8th, 2011, while the anime first aired on July 4th, 2014. The first season of the show and the manga follow the same path, following Ken Kaneki, his run ins with man-eating monsters disguised as humans, named ghouls, and how he survives with his new reality. While ghouls look almost completely identical to humans, their bodies are completely different. They feed off of human flesh, and are unable to digest human food without getting sick. The only thing they can enjoy like humans do is coffee. There is also the CCG, the Commission of Counter Ghoul, which is the special police task force that deals with ghouls. A ghoul’s skin is incredibly tough, and is unable to be cut by traditional weapons, so the CCG are armed with a weapon called a Quinque. Quinque’s are made from taking out a kakuhou from a ghoul, which manifest a weapon that protrudes from a ghoul’s body as a defensive mechanism. The second season takes a different path from the original source material, and is often disregarded by fans as they don’t like the story or Kaneki’s character development as he goes more lone wolf, power hungry, and less being there for the ones he cares for.

The manga starts out with Kaneki dining at a cafe with his best friend, Hide, after their college classes. There he meets the girl that would turn his life upside down, Rize. The two of them go on a date, but at the end of the date, Rize reveals to Kaneki on an empty street that she’s actually a ghoul, as she takes a bite out of his shoulder. He tries his best to run away from her as she chases him down to a construction site, where she critically wounds him. Before she is able to kill him, steal beams that were hanging above them were dropped down on top of Rize, killing her on impact. Upon being discovered, Kaneki and Rize are rushed to a local hospital. With Rize being called dead, and Kaneki’s organs failing, the doctor makes the decision to place the girl’s organs inside of Kaneki to save his life. This surgery in turns changes Kaneki’s body, turning him into a half-human, half-ghoul hybrid. Kaneki is soon forced to adjust to his new life, learn more about the ghoul world, how he can survive, and what his role in all of this is. He soon gets a job at a peaceful ghoul cafe name Anteiku, where he is shown a new side of ghouls he’s never heard of. There, they serve both humans and ghouls as a way to study humans to better integrate themselves into human society. Eventually he forms a small group of his close friends to he attempts to topple an anti-human, terrorist ghoul organization named Aogiri while trying to find answers on the doctor who turned him into a ghoul.

The first season of the show follows the same path as the manga until he is captured and tortured by members of Aogiri. During the course of the second season, Kaneki starts to follow a path of death and destruction as he joins Aogiri in an attempt to gain strength to be able to protect the people he holds dear, whether they be human or ghoul, at the cost of his mental state.  Kaneki starts to isolate himself, and resorts to cannibalism because he heard that if a ghoul eats another ghoul, that it will make you stronger, but the negative effects it had on his body and his mental state show why it’s not a more common choice made by ghouls. At the end of the second season, Anteiku is discovered to be run by ghouls, and is targeted by the CCG and is a massive raid. Kaneki rushes over to the cafe to protect his friends, and runs into encounter after encounter. Exhausted and wounded from all of the fighting, he stumbles into the coffee shop, only to find his human friend Hide, who had joined the CCG as a delivery boy and informant to be able to protect his friend Kaneki after he finds out he was a half-ghoul. Hide was fatally wounded during the raid, and interrupts their heartwarming reunion, as he falls to his knees coughing up blood, and eventually dies in Kaneki’s arms.

While the Tokyo Ghoul manga and anime start off the same, they both take a different path to tell Kaneki’s story. The manga has a lot more detail and symbolism that doesn’t make it into the anime, making you feel like something is just lacking while watching it. It’s a dark story that shows the best and the worst of both sides, humans and ghouls, as both sides struggle to find a balance as they just keep fighting and killing each other.

I guess I just need a place to put my thoughts down. I’m not entirely sure what to put, but I’m sure that gets easier.

I’m currently sitting on a swing set at my park because I wanted to get out of my house. I should be home working on my drawings, but I just can’t seem to get myself to do it, and if I do, I get easily distracted.

I don’t know what I’m going to do. I keep sulking around as if the answer is going to come to me. Although I know it’s not that easy, I just can’t seem to motivate myself to find it.